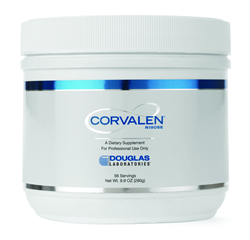 DESCRIPTION Corvalen M ® D-ribose, distributed exclusively to healthcare professionals by Douglas Laboratories, is a natural pentose sugar that is designed for the support of fatigue, energy production, and mitochondrial function. Magnesium and malate are added to this formula to help in the utilization of energy and support symptoms of fatigue.

Corvalen M® contains pure D-ribose, a safe and clinically researched ingredient that supports the natural way our bodies produce adenosine triphosphate (ATP), the energy currency of the cell. Ribose is the vital structural backbone of critical cellular compounds called purines and pyrimidines. Our bodies must have an adequate supply of purines and pyrimidines to form major cellular constituents such as our genetic material (DNA and RNA), numerous cofactors, certain vitamins, and, importantly, adenosine triphosphate (ATP). Ribose is the starting point for the synthesis of these fundamental cellular compounds, and the availability of ribose determines the rate at which they can be made by our cells and tissues.

D-ribose is a structural component of DNA, RNA, ATP, GTP, flavins (FAD, riboflavin) and other important nucleotides found in all living cells. Ribose is formed naturally via the pentose phosphate pathway. This pathway is slow and rate-limited in cardiac and skeletal muscle due to an inherently low concentration (lack of expression) of the enzymes, glucose-6-phosphate dehydrogenase and 6-phosphogluconate dehydrogenase. The product of this pathway is ribose- 5-phosphate, which in turn is converted to 5-phosphoribosyl-1-pyrophosphate (PRPP), the primary driver in the synthesis and salvage of purine nucleotides. No other compound can be used by the body for this metabolic purpose. Purine nucleotides (ATP and its precursors) lost due to ischemia, hypoxia, or genetic predisposition are replaced via the purine nucleotide pathway. This pathway is rate limited by the availability of ribose in tissue. Administration of exogenous ribose bypasses the rate-limiting steps in the pentose phosphate pathway, resulting in a significant acceleration of PRPP.

A deficiency of ATP energy in the cell, also called mitochondrial dysfunction, can lead to symptoms of occasional muscle pain, fatigue, sleep disturbances, and brain fog. It has been postulated that some people may have an alteration in muscle adenine nucleotide metabolism, which leads to depleted energy reserves and an imbalance in cellular ATP:ADP:AMP ratios with an abnormal energy charge. A study performed on 41 patients with symptoms of fatigue and muscle pain resulted in approximately 66% of patients experiencing significant improvement while on D-ribose, with an average increase in energy on the visual analog scale of 45%, and an average improvement in overall well-being of 30%.

Malic acid is a naturally occurring organic acid and an important intermediate in the Krebs cycle, acting as an electron donor to the phosphorylization reactions in the mitochondria. Magnesium is critical in facilitating hundreds of biochemical reactions including those involved in energy production. Although D-ribose is a five-carbon monosaccharide, it does not raise blood sugar.

Corvalen M® D-ribose is highly soluble in both hot and cold solutions and tastes slightly sweet and tart. Corvalen M® D-ribose is non-GMO. D-ribose is rapidly and readily (~95%) absorbed with peak blood levels found within 30  45 minutes. Ribose not taken up by the cell is excreted unchanged in the urine. Corvalen® D-ribose is GRAS (generally recognized as safe), a determination that results only after considerable toxicology studies are performed by the FDA.

Corvalen M® D-ribose is a useful dietary supplement for those patients that want to restore energy and support the symptoms of fatigue with the added benefit of magnesium and malate to help relieve occasionally sore muscles.

Usual dosage: 1 scoop (2 tsp) serving twice daily, taken with meals. A third serving may be added with a mid-day meal o snack as needed.
Alternative dosage: 1 scoop 30 minutes before and just after exercise or physical activity.
Corvalen granular powder may be dissolved in 2 oz. or more of juice or liquid or sprinkled over other foods of choice. Do not mix with milk or carbonated beverages.

No adverse effects have been reported unless taking doses greater than 10 grams of ribose at one time, which may result in loose stools.

Store in a cool, dry place, away from direct light.
Keep out of reach of children.

Corvalen M® D-ribose is a useful dietary supplement for those patients that want to restore energy and support the symptoms of fatigue with the added benefit of magnesium and malate to help relieve occasionally sore muscles.