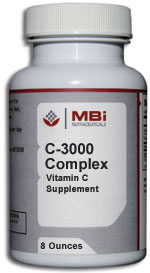 In 1928, Dr. Szent Gyorgy was working with the adrenal glands of oxen and isolated a sugar like substance which was crystalline in nature and had similar properties to the anti scorbutic factors found in oranges and other citrus fruit. Four years later the substance was identified and a synthesis method was developed to supply the nutrient in large amounts. In 1938, Dr. Szent Gyorgy and Sir Walter Haworth received the Nobel Prize for their work.

The world's researchers set about the task of ascertaining the properties of this important discovery in biological systems. It was found that Vitamin C acts as a reducing agent aiding in the prevention of aging cells and tissues. This vitamin prevents improper oxidation of the aqueous sections of cells such as cell membranes, proteins and enzymes.

It was shown to promote healing by acting as an intermediary in the synthesis of collagen by aiding the synthesis of hydroxyproline and hydroxylysine, these being key component amino acids for the cross linking of collagen fibers and the formation of body tissue. Vitamin C was found to be essential to proper adrenal function. When the body is under stress the adrenal gland may consume 200 mg of Vitamin C every hour. A Vitamin C deficiency can impair the output of important adrenal hormones such as cortisol which controls mineral and electrolyte balance, healing, immune response, metabolism and release of glucose from the liver.

Other researchers found that Vitamin C also played a role in detoxifying the body and fighting disease. Dr. H.N. Holmes found that ascorbic acid detoxifies the effects of lead in the body. He felt that Vitamin C and its metabolites, such as ketoglutaric acid, may act as chelating agents aiding in the removal of lead and other heavy metals from the body.

Vitamin C, when given in large doses, has been useful in various viral and bacterial diseases. Dr. F.R. Klenner cured cases of polio, encephalitis, and meningitis in three to four days by giving sodium ascorbate in intravenous doses between 50 and 150 grams in 24 hours. Dr. Klenner found that this therapy was highly effective for all types of viruses from herpes simplex to mumps.

Other researchers have shown that Vitamin C when given in multigram doses can be effective in fighting bacterial diseases. By taking 7 grams of ascorbic acid every four hours, the body can maintain tissue levels of 10 mg% or greater. When given at this level, Vitamin C was shown to retard the growth of tuberculosis, typhoid, pneumonia, whooping cough, leprosy, staphylococcus and diptheria.

A researcher in Scotland, Dr. Ewan Cameron, has demonstrated a definite slowing in tumor growth by consuming doses of 10 grams of Vitamin C per day. He found that the group of terminal cancer patients actually lived 4.5 times longer than the untreated group. Ten percent of the Vitamin C control group actually lived 20 times longer.

Dr. G.C. Willis found, while working with guinea pigs, that rapid onset of atherosclerosis takes place in those control groups which are deficient in Vitamin C. He also observed that groups given high cholesterol diets also had a higher requirement for the vitamin in order to prevent the onset of the plaques.

Vitamin C assists in the secretion of hormones from the adrenals, Epinephrine and norepinephrine, and converts folic acid to folinic acids. It has both antihistamine and diuretic actions and promotes healing. Vitamin C also strengthens the lens of the eyes, thereby decreasing cataracts, inflammations and infections of the eyes.