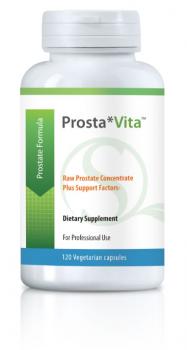 Prosta*Vita is a multi faceted formula design to support the prostate gland and help restore function to the urinary tract system. The walnut-sized prostate gland is part of the male reproductive system, located just below the bladder and surrounds the urethra. It is common for the prostate gland to become enlarged as a man grows older, resulting in a condition called benign prostatic hyperplasia or BPH. Around the age of 40 symptoms may start occurring due to the enlarged prostate including more frequent urination, a hesitant interrupted weak stream and possible recurrent urinary tract infections. As the prostate gland enlarges, it presses against the bladder wall. This causes the tissue to get irritated, leading to only partial emptying of the bladder and thus more frequent urination. There may also be a narrowing of the urethra caused by the enlarged prostate, which will further inhibit normal urination. BPH may occur because of higher amounts of hormones or hormone-like metabolites such as estrogen and dihydrotestosterone (DHT) which encourages the growth of cells. Prosta*Vita sources the highest quality herbal extracts that may help address the symptoms associated with an enlarged prostate.

Saw Palmetto Extract Inhibits DHT: Saw Palmetto (Serenoa repens), has long been used by herbalists for bladder and urinary problems. It has also been used as an aphrodisiac due to its ability to maintain testosterone levels. The active ingredients have been isolated from the liposterolic, or fatty acid extracts, of the Saw Palmetto berries. Recent studies have demonstrated the ability of this extract to inhibit the enzyme responsible for production of DHT and therefore, may effectively reduce problems associated with benign prostatic hyperplasia (BPH).

Beta-sitosterol, African Pyguem Bark and Swedish Pollen Extract exhibit Phytosterol properties: Certain forms of estrogen, along with testosterone and DHT can bind to androgen receptors on the prostate and activate cell growth. Inadequate levels of some of these hormones may promote too much cell growth and lead to an enlarged prostate or to unregulated proliferating cell growth within the tissue. Beta-sitosterol along with the compounds found in the African Pyguem Bark and Swedish Pollen Extract also display androgen receptor binding affinity but will not cause stimulation of cell growth. These ingredients will competitively inhibit binding of their hormone counterparts to the androgen receptors and help restore normal cell growth in the prostate. Studies have also shown that these ingredients may help relax urethral smooth muscle tone and increase bladder muscle contraction, which will lead to un-interrupted urine flow.

Selenium Prosta*Vita formula has recently been improved by adding Selenium (Amino Acid Chelate). In Clinical Studies, Se (selenium) treated cells exhibited increased oxidative DNA repair activity. This mechanism can be attributed to the production of Selenoproteins, which are selenium dependent enzymes in the body. Most notable selenoproteins are Glutathione peroxidase and Thioredoxin reductase, which act as intracellular and extracellular antioxidant enzymes that reduce potentially damaging compounds in the body. The benefits of selenium and selenoproteins include the combination of antioxidant activity, the reduction in DNA damage, the enhancement of oxidative DNA repair capacity, and the regeneration of several antioxidant compounds including vitamin C. These properties help to restore and maintain normal cell growth.

Zinc: Zinc is one of the most abundant essential trace minerals present in the body with major reservoirs found in tissues that reside in the mammary gland, pancreas, and prostate. Zinc has an array of functions in the body ranging from enzymatic activity, structural integrity of proteins, and regulation of gene transcription. In fact, almost 100 different enzymes need zinc present to perform their catalytic functions in the body. Healthy prostate glands contain approximately three times more zinc compared to other tissues in the body in order to help manufacture and release prostatic fluid, to provide microbial protection and to reduce the oxidation of molecules used in certain enzymatic processes of the mitochondria.