No Jet Lag Each - 32 TB by Miers Laboratories 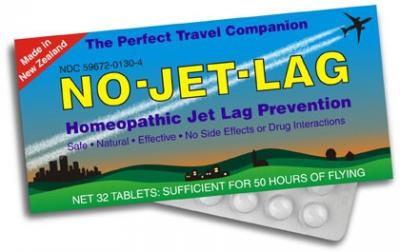 No-Jet-Lag is a unique product specially formulated and rigorously tested to alleviate jet lag. In the 1994 survey of international flight attendants, 75% of respondents said No-Jet-Lag was either good or very good in countering the effects of jet lag.

An important advantage of No-Jet-Lag is that it contains only homeopathic remedies. Because of the small dilutions used, these remedies do not produce side effects. No-Jet-Lag can be used with all other types of medication. It can be taken by travelers of all ages.

Like all homeopathic remedies, it is most effective if taken separately from meals, but this is not essential. It is recognized that long haul passengers often sleep for long periods in flight and wake only for meals, so No-Jet-Lag has been formulated to ensure it will be effective even if taken with meals, including coffee.

No-Jet-Lag does not counter the effects of alcohol or lack of sleep. It is recommended that in addition to taking No-Jet-Lag, passengers adopt other sensible measures to help arrive at their destination in the best possible shape. These include not over-eating in flight, limiting alcohol consumption, drinking plenty of non-alcoholic fluids (especially water), putting feet up if there is room, and taking any opportunity in flight or during ground stops to walk and do stretching exercises.

Taking No-Jet-Lag is easy and convenient.
Chew one tablet each time your plane takes off and each time it lands, even if you are not disembarking, to counter the effects of pressure changes, and one every two hours while flying to counter the effects of long haul flight. However, intervals of up to four hours between tablets are acceptable if sleeping in flight. No-Jet-Lag is best taken separately from meals, but this is not essential. It can be taken with other types of medication.

Each pack of No-Jet-Lag contains 32 tablets, usually enough for over 40 hours of flying (equivalent to a round-the-world trip).

For the relief of tiredness and jet lag associated with flying.