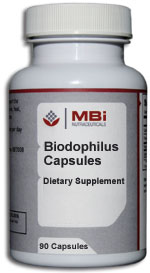 Lactobacillus are a lactic acid bacteria meaning that they have the ability to transform sugar to lactic acid. The formation of this acid is one of the ways that the Lactobacillus bacteria inhibit the growth of pathogens such as E.Coli and candida albicans. They assist in the digestion process, absorption of nutrients, synthesis of certain vitamins, bowel function, detoxification and elimination of pathogenic organisms. Any upset in the balance of the microflora can lead to digestive problems such as bloating, gas, constipation, malabsorption of nutrients, deficiency of certain B Vitamins and Vitamin K. It can also lead to an overgrowth of pathogens such as candida and an increase in blood toxins, such as ammonia, which can put a strain on liver function.

Recommendations
As a dietary supplement, take one capsule one to three times daily, between meals or as directed by your health care professional.