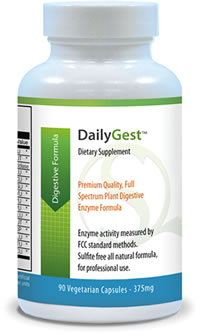 Enzymes in DailyGest® by Food Type:

Malt Diastase (Maltase) continues the breakdown of starch by removing successive maltose units from the nonreducing ends of polysaccharides.

Glucoamylase completes the hydrolysis of starches by turning maltose into glucose. Glucoamylase hydrolyzes terminal (end) linkages while Amylase works on the interior bonds.

Lactase digests milk sugars into glucose and galactose. This action is especially important in individuals who consume milk products and have a lactase deficiency (known as lactose intolerance). This group includes 70% of the worlds population and over 1/3 of the US population.

Invertase (Sucrase) breaks down sucrose (refined table sugar) into glucose and fructose. It is theorized that undiagnosed sucrose intolerance contributes to many allergies.

Alpha-Galactosidase is included to hydrolyze certain types of sugars called oligosaccharides found in certain vegetables, legumes, and grains. These sugars, including raffinose, stachyose, and verbascose, are indigestible because humans do not produce alpha-Galactosidase to break them down. Undigested, these sugars remain in the intestine and are fermented by certain bacteria, causing gas and bloating.

Cellulase is a complex of 3 enzymes which convert the cellulose in plant fibers to glucose.

Hemicellulase will hydrolyze hemicellulose, a polysaccharide which binds certain enzymes and decreases the rate of nutrient digestion. Hemicellulase will reduce the molecular weight of these components, such as galactomannoglucans, beta glucans, pentosans, and various gums, then turning them into the more easily assimilable polysaccharides.

Phytase digests phytate, a major component of wheat bran that binds minerals such as zinc iron and calcium, hindering their absorption. Phytase catalyzes the hydrolysis of phytate (phytic acid) into its component parts, releasing beneficial inositol and ortho-phosphate.

Protease is an enzyme which digests proteins. By combining 5 different Proteases, DailyGest® allows for the digestion of protein at the full range of pH conditions as exist in the entire digestive tract, from the stomach to the small intestine. Optimal protein digestion begins in the stomach, which has a lower pH. To ensure that the entire spectrum of digestive pH 2.0-11.0 is covered, three different proteases are used to cover the wide range of activity. In addition, neutral bacterial protease is added to hydrolyze most soluble proteins.

Peptidase FP is added to selectively hydrolyze protein molecules at the ends of a peptide chain and liberate amino acids.

Bromelain is a mixture of enzymes from ripe and unripe Pineapple fruit and plant stem, which has a range of activity. It breaks down proteins to form peptides and amino acids with preferential cleavage of peptide bonds, where the carbonyl group is from either a basic amino acid or an aromatic amino acid. Bromelain is also effective as an anti-inflammatory agent.

Papain is derived from the Papaya plant (the latex of the unripe fruit) and has been used to aid digestion since the 1880s. It has also been used to relieve dyspepsia and other common digestive disorders. Clinically, it has been shown to prevent peritoneal adhesions common after surgery.

DailyGest® contains a large amount of Lipase, the enzyme that specifically digests fats (triglycerides) into free fatty acids and glycerol, enabling absorption of fat soluble nutrients through the intestinal mucosa. Improper fat digestion is a very common ailment in populations such as the U.S. where large amounts of fats and oils are consumed. Significant discomfort such as bloating, gas, and a full feeling are common in middle aged and elderly people who lack sufficient lipolytic enzymes. The dose of 1000 LU of Lipase is specifically designed to digest meals containing large amounts of fat.

Enzymes are complex proteins that act as catalysts in almost every biochemical process in the body. Their activity depends on the presence of adequate vitamins and minerals. Food enzymes include proteases for digesting protein, lipases for digesting fats, and amylases for digesting carbohydrates. Humans eating an enzyme-poor diet, comprised primarily of cooked food, use up a tremendous amount of their enzyme potential in the outpouring of secretions from the pancreas and other digestive organs.

What Type of Enzymes are in DailyGest®?

DailyGest® contains only plant source digestive enzymes, as opposed to animal source Pancreatic Enzymes. Plant derived enzymes are specifically useful in digesting the many types of foods in a varied diet. These include fat, starch, protein, sugars, and fibers.

What is the Difference Between Plant and Animal source enzymes?