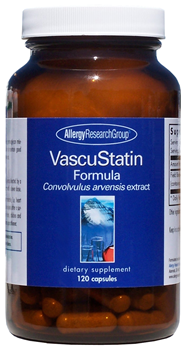 Bindweed or Convolvulus arvensis is a commonly found weed and every farmer's nightmare - damaging crops by wrapping itself around plants such as corn and wheat. Bindweed grows all over the world - from Europe to China, and from Canada to South America. Farmers actually refer to it as "the cancer of weeds" - an ironic nickname. This amazing weed has demonstrated powerful angiogenesis inhibiting properties - testing 100 times stronger than shark cartilage. With this kind of data, the potential for patients is enormous: a patient could take just 2 capsules per day of this extract versus the equivalent of 200 capsules of shark cartilage per day. For this reason and others we have discontinued the sale of shark cartilage

Suggested Use:
As a dietary supplement, 2 to 12 capsules daily or as directed by a healthcare practitioner.

Most doctors prescribe a dosage that equals the usage of 2 to 3 bottles per month.

The proteoglycan mixture (PGM) found in bindweed has tested 100 times more effective than shark cartilage by weight. Using chicken egg chorioallantoic membrane tests, PGM was found to inhibit angiogenesis from 18% (for doses of 50 mcg per egg) to 73% (for doses of 200 mcg per egg). See photos and charts.

The Mechanism Behind The Weed

Researchers at the Center for the Improvement of Human Functioning in Wichita, Kansas have conducted numerous studies on PGM to identify the mechanisms behind its anti-neoplastic effects: There are only a handful of possible mechanisms to look for: immune stimulation, apoptosis induction; redifferentiation; angiogenesis inhibition; and the direct killing of tumor cells PGM works as an angiogenesis inhibitor" - Neil Riordan, PA-C, M.S.

In addition to its angiogenesis inhibiting properties, PGM is also a moderate immune stimulator. Studies done on PGM's effect on human lymphocyte growth in vitro have demonstrated an increase in lymphocyte production from 35 to 46 percent. Physicians working with cancer patients are reporting positive results consistent with this data. See 'What Doctors Are Saying after this article.

Numerous animal studies have been performed to determine the toxicity of bindweed extract. At the equivalent of 1400 grams of PGM for humans, no toxicity was found in test animals. However it is important to note that bindweed, before the extraction process, does contain toxic alkaloids.

PGM is a potent angiogenesis inhibitor with mild immune stimulating properties, such as stimulating lymphocyte production. In animal studies, faster results occurred when an immune stimulant was added to the PGM. PGM is currently being studied as an adjunct to chemotherapy and immunotherapy at the Biocommunications Research Institute in Wichita, Kansas.

The statements made herein have not been evaluated by the US. Food and Drug Administration This product is not intended to diagnose, treat, cure, or prevent any disease.

Recruitment of new blood vessels plays a crucial role in tumor survival and growth. Several agents that act as angiogenesis inhibitors are currently being investigated as anti-tumor agents. Proteoglycan extract (PGM) was tested for anti-angiogenic, immunostimulatory, and anti-neoplastic activity. PGM is a non-toxic extract of the ubiquitous plant, Convolvulus arvensis. In the chicken egg chorioallantoic membrane assay PGM inhibited new blood vessel growth in a dose dependent manner. Results were 18, 55, and 73% inhibition at concentrations of 50, 100, and 200 mcg. respectively. PGM significantly inhibited tumor growth in the mouse fibrosarcoma (S­180 Kun Ming 3-4 week old mixed male/female, 10 animals per group, 2501000 mcg. daily doses for 14 days), and mouse Lewis Lung Carcinoma (C57, 6 wk old mixed male/female, 10 animals per group, 2501000 mcg. Daily doses for 14 days) models. Inhibition (5477% inhibition by weight compared to controls, up to 96.8% by cellular composition) occurred regardless of route of administration: intravenous, intraperitoneal, subcutaneous, and oral. PGM induced lymphocyte growth in a dose dependent manner. The ability of PGM-treated phagocytes to phagocytose yeast cells was 85% greater than controls. We conclude that PGM is a potent angiogenesis inhibitor that has immunostimulatory activity in vitro and anti-tumor activity in vivo and that PGM should be studied further as an antineoplastic agent.

Every aspect of tumor growth requires vascular growth. In 1971 Folkman hypothesized that controlling angiogenesis could be a feasible anti-tumor strategy. Recently the description of angiostatin and endostatin has resulted in increased interest in angiogenesis inhibitors as anti-tumor agents.

Because of an anecdotal report of complete remission in a case of human ovarian carcinoma after consumption of 'an extract of the ubiquitous plant Convolvulus arvensis, we tested extract of this plant for anti-angiogenesis and immune stimulating effects.

Convolvulus arvensis is well known to contain toxic alkaloids. Therefore, in this study we examined a high molecular weight water extract of the plant that does not contain appreciable concentrations of alkaloids, which are depleted in the manufacturing process. The extract is primarily comprised of proteoglycan molecules and is herein referred to as PGM.

Research has been presented demonstrating that an extract of the plant Convolvulus arvensis has potent angiogenesis inhibiting and immune-stimulating qualities. This extract also demonstrated anti-tumor effects in two mouse tumor models. The exact details regarding the anti-angiogenesis mechanism of bindweed extract are not completely understood. This extract should be studied further to elucidate its anti tumor effects and mechanisms of action. .

We conclude that MPGC has immunostimulatory and anti-tumor qualities and should be studied further as an immuno-therapeutic agent for cancer.

Muramic acid is a component of bacterial cell wails with immunostimulatory qualities that may be partially responsible for the anti-tumor effects of gram-positive bacterial extracts. Muramyl peptides (comprised of two muramic acids bound together) sensitize macrophages to phosphatidylserine and muramic acid, both of which are found preferentially on tumor cells. Muramyl peptides up regulate monocyte cytokine genes (IL-1 beta, IL-6, IL-8, IL-12, macrophage chemotatic and activating factor, and tumor necrosis factor alpha but not lL-2 or IL-10) and activate monocyte-mediated tumoricidal activity. Muramyl peptides increase the ability of macrophages to recognize virally infected cells, including cells infected with oncogenic viruses. Muramyl peptides and muramic acid are not selectively internalized by monocytes, and therefore have been associated with toxicity. Monocytes/macrophages have mannose receptors that allow them to readily internalize polysaccharides that contain mannose.

Summaries and results of several significant animal and human studies conducted the above researchers can be seen in the following pages.

Research has been presented demonstrating that MPGC has immune-stimulating and anti-tumor qualities. MPGC should be studied further to elucidate its anti-tumor effects and mechanisms of action.

VascuStatin Formula is a water extraction of the leaves of the herb Convolvulus arvensis, commonly known as bindweed, and is rich in proteoglycan mixture (PGM). The bindweed contained in VascuStatin is grown in Wyoming, and the toxic alkaloids are removed by a proprietary process.