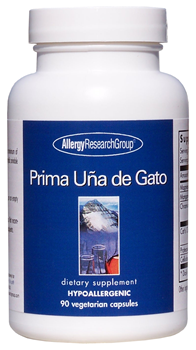 As a dietary supplement, 1 capsule one to three times daily, on an empty stomach, or as directed by a healthcare practitioner.

Provides active ingredients that can help modulate and support immune function, and is free of tetracyclic oxindole alkaloids (TOAs). Can help regulate inflammation and microbial balance in the gastrointestinal system. Provides antioxidant activity and support of circulation U a de Gato (Uncaria tomentosa), or cat´s claw, has long been used by indigenous healers in the rainforests of the Peruvian Andes and elsewhere in South America. In recent times it has been studied for its ability to support gastrointestinal and immune functions. In the gastrointestinal tract, it has been shown to help control inflammation and microbial balance, and soothe irritated tissue. Research into its ability to support the immune system has shown that it has antioxidant properties, which may support the body´s inhibition of the development of potentially aberrant cells. It can support circulation through the strengthening of capillaries.

TOA-free chemotype cat´s claw can help to restore and boost the immune system. The POAs are the active ingredients that provide the principal immunomodulating and immunostimulating activity. POAs are actively involved in the functional mechanisms of both innate and acquired immunity, assisting in the maintenance of the immune system´s structural and functional integrity. In addition, Prima Una de Gato contains quinovic acid glycosides, the natural compounds upon which the synthetic antibiotic quinolones are based.

TOA-free cat´s claw was introduced into Bulgaria, which has a high occurrence of Borrelia burgdorferi, in January 2001, where it quickly became the most widely sold natural remedy in that country. TOA-free chemotype cat´s claw has been used by Dr. Atanas Tzonkov in Bulgaria's largest private medical clinic, in the nutritional support for thousands of patients, involving over 100 conditions. Also in 2001, the Hungarian National Institute of Pharmacy (OGYI), equivalent to the U.S. FDA, approved TOA-free chemotype cat´s claw for over-the-counter use.

Prima Una de Gato offers a significant advancement in our understanding of the best utilization of Uncaria tomentosa. The Prima Una de Gato formula is potentized with minerals and enzymes to support detoxification, and has been clinically tested. Atanas Tzonkov, director of the Lechitel Clinic in Sofia, Bulgaria, has stated that TOA-free chemotype cat´s claw can fortify a person´s own self-healing power which Nature has built into his spirit, mind and body. # 75040