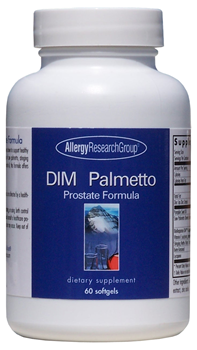 How Your Patients May Benefit from DIM Palmetto Prostate Formula, dietary supplement.

DIM (diindolylmethane) has been shown to help regulate and promote a more efficient metabolism of estrogen, and an optimal ratio of estrogen metabolites important for male as well as female health.

Other ingredients:
Yellow beeswax as a suspending agent.

Available in:
bottles of: 60 vegetarian capsules

Suggested use:
As a dietary supplement, 2 softgels daily with food, or as directed by a healthcare practitioner.

Caution:
Do not use this product if you are pregnant or lactating, or using birth control pills.

DIM Palmetto Prostate Formula includes a stable, bioavailable form of DIM, made possible through a proprietary delivery system. The formula is co-solubilized with phosphatidylcholine, and microencapsulated in starch particles.

Research over the past thirty years has determined that disrupted estrogen metabolism is closely linked to several health risks in men as well as women, particularly those involving the prostate, uterus, breast, and other reproductive tissue. Genetics, excess weight, poor diet and other lifestyle factors may result in an imbalance of estrogen metabolites. Xenoestrogenic compounds of the modern world, such as organochlorine pesticides and plastics, can significantly disrupt healthy estrogen metabolism.

These estrogen disruptors alter estradiol hydroxylation metabolism producing a higher ratio of the genotoxic 16 alpha-hydroxyestrone (16 a-OHE1) to the safer and weaker estrogenic 2-hydroxyestrone (2-OHE1). The genotoxic 16 a-OHE1 stimulates cellular proliferation, increases oncogene expression, and inhibits apoptosis. It is clear that modulating these aspects of estrogen metabolism, particularly the production of 16 a-OHE1, may potentially contribute to healthy aging.

The phytochemicals in cruciferous vegetables have been shown to beneficially affect the body's hormonal and detoxification systems. Epidemiological studies have supported the health benefits of consuming these vegetables. DIM is a major active acid-catalyzed derivative of one of the phytochemicals in cruciferous vegetables, indole-3-carbinol (I3C). DIM is thought to be responsible for the health effects of dietary I3C. Research using human breast cells (MCF-7) has shown that DIM not only supports the body in inhibiting cell growth, but also induces apoptosis. These results involve DIM binding to the aryl hydrocarbon receptor (AhR) resulting in rapid formation of the nuclear AhR complex and consequent induction of gene expression and synthesis of cytochrome P450 detoxification enzyme (CyP450A1). DIM consequently supports the body in producing increased levels of the protective hydroxylated estrogen 2-OHE1.

The mechanisms for DIM's health benefits primarily involve the induction of mixed function oxidases and phase II detoxification enzyme systems by the binding and activation of the arylhydrocarbon receptor. Some have suggested that DIM may also positively affect cellular signaling pathways potentially being of benefit in that regard. It is becoming increasingly apparent that dietary supplements like DIM may provide an important mechanism for maintaining health despite the increasing levels of xenoestrogenic compounds in our modern world.

Saw palmetto (Serenoa repens) berry extract has also been shown to support the function and structure of the prostate. The mechanism is thought to involve the inhibition of 5 alpha reductase. This enzyme catalyzes the conversion of testosterone to its more active and potentially dangerous metabolite, dihydrotestosterone. Beneficial effectiveness of saw palmetto, as well as that of nettle and pumpkin seed oil, may also stem from their inhibition of proinflammatory prostaglandins and leukotrienes which may exacerbate symptoms of benign prostate hyperplasia (BPH). Some have suggested that the inhibition of alpha 1-adrenoceptor may be responsible for this herb's therapeutic effectiveness in relieving the urinary tract symptoms of BPH.

Beta-sitosterol, a key ingredient of the medicinal bark of Pygeum africanum, has provided significant support of reduction in symptoms of BPH, particularly that of urinary flow.

The antioxidant capacity of lycopene and zinc, the latter as a constituent of superoxide dismutase, can combat the oxidative stress that is associated with undesirable prostate conditions. The body uses zinc during the induction of apoptosis, thereby potentially being supportive in reducing aberrant prostate cell growth.

Suggested Use: As a dietary supplement, 2 softgels daily with food, or as directed by a healthcare practitioner.

Do not use this product if you are pregnant, lactating, or using birth control pills. Persons taking prescription medications should consult a healthcare professional before use. Harmless changes in urine color may occur.

Keep out of reach of children.

These nutrients are of the highest quality and purity obtainable, and do not contain preservatives, diluents, or artificial additives.