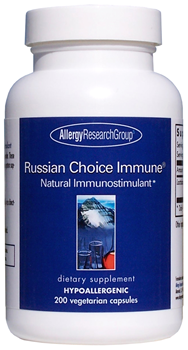 Description
Russian Choice Immune is made from a specific strain of lactobacillus, first identified in the 1980s by Russian researchers as Lactobacillus delbrueckii ssp bulgaricus. More precise modern technology has allowed U.S.
researchers to identify it as a particular strain of Lactobacillus rhamnosus. Russian Choice Immune has been shown to stimulate the innate immunity, the "first responder" in the immune system hierarchy, which can help magnify the immediate response of the immune system.
Russian Choice Immune, while not containing live bacteria itself, may also support the growth of healthy intestinal flora, by providing immunoactivating proteins in the intestinal villi cells, supporting the natural repair mechanisms and healthy condition of the villi. Healthy villi can promote the adhesion of friendly bacteria to intestinal cells, supporting the further growth of the bacteria.
Russian Choice Immune contains specially prepared lactobacillus cell wall fragments, which have very different properties from lactobacillus taken to repopulate the intestinal tract. The Russian Choice Immune lactobacillus is cultured, and then the cell walls are broken apart, or lysed. This frees the immune-active proteins that are usually sequestered inside the cells to have unimpeded access to trigger and magnify the immune system response. Although probiotics and cultured milk products have immune supporting properties, Russian Choice Immune is a much more powerful immune system stimulator.
Cell walls and cell wall fractions of lactobacillus have been used in Europe as immune stimulators for many years, and have demonstrated consistent efficacy. Bulgarian researchers found effective strains capable of stimulating both cellular and humoral immunity. Russian researchers also found this out, after the Russian military directed them to develop protection against biological warfare agents. Taking note of the folk lore regarding the immune-stimulating properties of cultured milk products, Russian microbiologists discovered a lactobacillus with these properties. Working with scientists in Bulgaria , the Russian microbiologists learned how to break the lactobacillus cell walls, resulting in potent cell wall fragments.
Laboratory tests led, in 1992, to clinical trials at the State Cancer Hospital in St. Petersburg , Russia , where these findings were confirmed in a wide variety of in vivo situations requiring immune system support. The substance was also used to boost the immune systems of patients undergoing chemotherapy and radiation, allowing the patients to complete their therapies without the usual debilitating effects. The doctors reported that the patients taking the Russian Choice Immune material looked and felt better, and had more energy.
As interest moved toward product development, improvements were made to the material. Allergy Research Group , working with partners of the Russian researchers, now offers Russian Choice Immune in the United States . Further refinements using innovative culture nutrition and precisely controlled manufacturing procedures have produced significant improvements in potency over the original Russian material. Currently, quality control using DNA and other contemporary analysis methods insures that every batch of Russian Choice Immune is pure and identical. The Russian Choice Immune products have been used for twenty years in Russia and five years in the United States . Russian Choice Immune has been shown to be very safe, even at high does of up to 15 grams per day, with virtually no side effects. Some people have reported taking up to 12 capsules a day during times of strong immune challenge, with no problems. Most people report taking 1-2 capsules a day with the desired results. The Russian Choice Immune lactobacillus is grown in a special media, not cultured in milk, and some lactose intolerant users have reported they experienced no problems taking it.

Suggested Use:
As a dietary supplement, 1 to 2 capsules up to 3 times daily, or as directed by a healthcare practitioner.

Keep in a cool, dry place, tightly capped. Do not refrigerate.